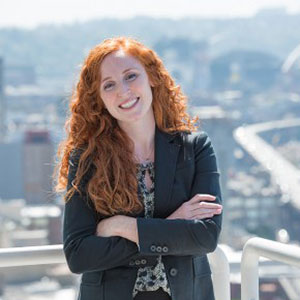 
Abby joined ELM in 2014 and works with both the business and litigation practice groups. Her work focuses on assisting clients in a broad range of transactional and business matters as well as business and commercial litigation.

Before joining ELM, Abby interned for Justice Susan Owens, of the Washington Supreme Court, and the civil division of the U.S. Attorney’s Office for the Western District of Washington. She advised the Washington State Legislature on possible means of expanding access to broadband networks as well as the legal and policy considerations of Internet anonymity networks. And she gained exposure to international commercial law by competing internationally in the VIS International Commercial Arbitration Competition.

U.S. District Court for the Eastern District of Washington

U.S. Court of Appeals for the Ninth Circuit

Abby serves as a coach to the University of Washington School of Law VIS International Commercial Arbitration team. She also coordinates her local church’s international outreach.

When at home, she cherishes time with her husband, two daughters, and ornery labradoodle. As a transplant from the Sunshine State, she can usually be found outside seeking the sun and sky.