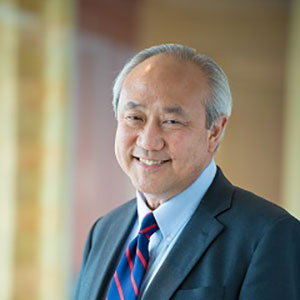 Skip spent his first 16 years living in Asia, Australia, and Latin America, and speaks fluent Mandarin Chinese and Spanish. He still does extensive work in other parts of the world. This gives him a unique global perspective for his professional and community activities.

Early in his career Skip was deeply involved in politics, and from 1973 to 1976 served as legal counsel to Washington Governor Dan Evans. After that experience, Skip returned to Seattle and founded the firm in January 1977, intent on building a first class law firm made up of men and women who cared deeply about clients, each other, and our city.

He has a broad range of legal experience, having started his career in a time when lawyers were generalists, and there were few specialists in the profession. That background helps him bring a breadth of knowledge to counseling clients, whether they are building a rapidly growing business, contemplating a major real estate transaction, or starting a non-profit organization.

He has long been rated AV Preeminent (the highest rating available) by Martindale-Hubbell, the leading lawyer rating publication in the U.S. He has been voted a “Superlawyer” by his peers for a number of years in Washington Law & Politics, a lawyers’ publication.

Skip is profoundly thankful for the freedom and opportunity he found in this great country. He loves Seattle and the Pacific Northwest, and is always grateful to return here after traveling.

From 1998 to 2009, Skip wrote op-ed pieces as a columnist for the Seattle Post-Intelligencer on a wide range of political, cultural and social issues. Here is his farewell article shortly before the paper was shut down.

In 1982 Skip began pursuing a dream of helping the rural poor in developing countries to buy their own farmland and to build economic self-sufficiency through farming that land. That dream has blossomed into a non-profit organization known today as Agros International. Agros has helped create over 42 communities so far in rural areas of Guatemala, El Salvador, Nicaragua, Honduras, and Mexico. In a number of these communities, people who could never have dreamed of owning their own farmland have successfully repaid their land loans and received title to their land.  Skip’s book on his life journey and how it tied into the work of Agros, Buy This Land, was published in 2012 and available on Amazon.com

He is an avid reader of historical fiction and science fiction. He has a passion for Mozart’s operas and great classical music.